As we all know, in a time of stress, socks are an important matter.

For me, the socks that are getting me through this winter are those Bambusoides ones, made partly from bamboo. Thick but elegant (I have the black ones and the stripey ones), warm to the touch, toasty on the feet, quick to wash and dry

“Blame us. Blame Westminster. Do not blame Brussels for our own country's mistakes and do not be angry at us for telling you the truth. Be angry at the chancers who sold you a lie.”

And here is @GuyVerhofstadt in response

"A fine speech. Yes, the EU needs reform. EU laws are often
imperfect. But it's all too easy for national politicians to offload their failures on "Brussels". We all have a duty to fight for a more effective, united Europe." #IamEuropean

Should we 'remain', or, if after a second referendum we remain, we will rresume our place as a member state of the EU.

But we should acknowledge that not all of our countrymen and -women feel the same way about Europe.

There is no triumph in my opinion in remaining - it's more a matter of common sense.

And we should work willingly with those of our compatriots who voted in the referendum to leave by setting up some sort of UK/EU liaison group.

In order to take my mind off our Great British political class for a moment  I sometimes just go for a walk. So at the weekend, I went 'rambling' in the City of London. 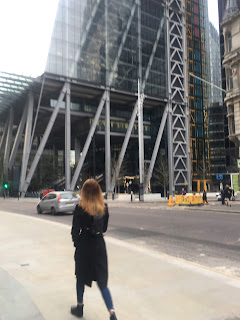 Among the glass and steel, the venerable, the much loved, the functional and the new, are men and women going to and from work in the 24-hour span of city business. Some shops, bars, supermarkets and many City businesses are open. However, I did notice something even newer this time: the superlative quality and cleanliness of the walking surfaces. It's as if the City is indeed being made to fulfil the dreamscape of its late-medieval Lord Mayor, Sir Richard (Dick) Whittington, as a City paved with gold. 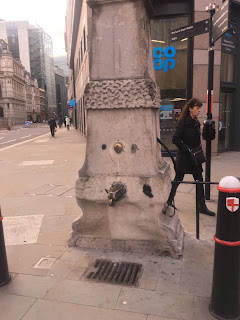 Of course the metaphorical meaning remains: the City where men (and increasingly women: sorry chaps) can settle down to business, work hard and make a fortune. Look at the paving around this ancient water fountain (public water fountains were one of Whittington's many gifts to the City). The golden tone is warm and inviting to the feet. Even when it rains, the sand-size grains in the rock will never let your foot slip but at the same time the paving stones will gleam so much they will indeed resemble gold. 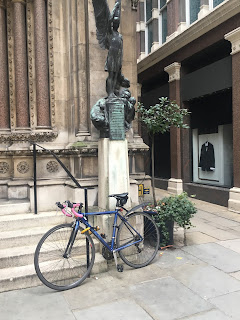 The church of St Michael's, Cornhill, the vicar's or the organist & choirmaster's bike parked at the door, the street swept and clean. Forgive me for clipping the wings of the angel standing on his plinth behind the bike. These stones, of wall, of step, of plinth, of paving, breathe. 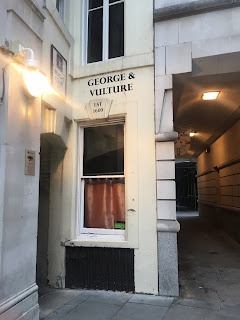 Back to the everyday or, rather, the magical network of the City's Alleyways. And of course watering holes. Just to the left of the narrow George & Vulture Alley lies the even smaller and narrower Bengal Court - and so on throughout the City - as back lanes, shortcuts and access paths to courts, yards and service areas.

There is such an urge to hibernate during winter that I sometimes wonder if we're being a bit stupid not to. Ha, I try not to follow the example of my cats too closely in this regard.

Here are three (3) unmistakable signs that winter will cme to an end. 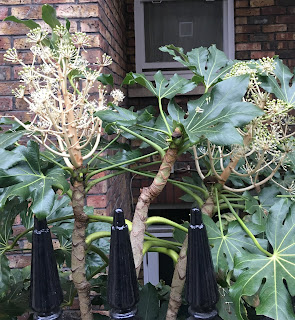 1. New leaves and the start of fruiting 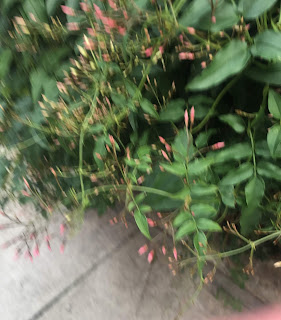 3. The fact that 3 nights ago I heard a blackbird sing lustily as blackbirds do (I think they're the first British bird to start nest-building) from a rooftop garden just up the road.

I am trying to get out for as many hours a day as possible before it gets dark - at which time I am as happy as anyone else to snuggle in the duvet.


My imagination took flight on Friday when the Standard published more detail about the transformation of Tottenham Court Road.

The whole area, from Euston Tower in the north to Centre Point in the south, is in the process of becoming a calm, creative and thoroughly commercial boulevard (those shops!) instead of a one-way racetrack for vehicles.

During the working day (from 8am to 7pm), it will form a congestion-free zone for 6 bus routes. Were they trams (and hopefully at least some of them will be low or no emission), the area is set to become its very own mini-Holland.

Two destinations to help with your *best* 2019 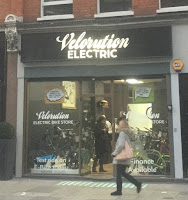 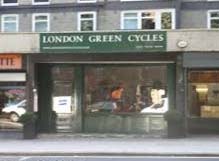 Sally Crawford is a blogger and installation artist based in London. She makes regular trips to The Hague writing about art and design and, as if that's not enough, she is slowly converting her London home-studio into a 3-dimensional artwork.
Also at thecrawfordartsreview.com
and sallycrawfordartanddesign.com